In the software world (and increasingly in other domains) agile project management is one of the more popular ways to manage projects. There are a lot of different versions of “agile” methodologies and the purpose of this post is not to go over those yet again. Instead I will cover some of the features in OneDesk that are geared primarily towards agile project management. You should note that one of the more unique things OneDesk brings to the table, is the ability to combine agile and traditional view of your projects, allowing for a more hybrid approach to project management.

Points and Points Capacity
Points are a stand-in for effort. When a company want to estimate the work involved in performing a task, but does not want to invest the time and effort into providing a detailed estimation, they can use a points system. This means that instead of working out the number of man-hours it will take, they will assign it a value on a points scale.

For example, the company may have decided on a 3-point scale where 1-point is very easy (a couple of hours), 2-points is medium (a day or so) and 3-points is difficult (a couple of days). Each task is then assigned a value from 1 to 3 points. Since this is such a rough estimate, it takes very little time to do, and thus the overhead of project planning is reduced.

Work is then broken down into iterations or sprints (in OneDesk these are projects), where each should be planned to be equal in terms of effort. To equalize these projects you assign a points capacity for the project. For example you may determine that your iterations should each have a capacity of 50 points. You then add tasks to the project until you reach that capacity.

On the tasks properties, OneDesk displays the points you have set for that task. These can be added as a column in the grid and are always displayed on the task-card.

On the project properties panel OneDesk displays the current number of points in the project (the sum of its tasks) as well as the points capacity that you determine for the project. Just add tasks until your capacity is reached.

Status Boards
A common paradigm for UI that has emerged for agile project management is the “card” view or the “status board”. This is a lightweight approach to task updates where the user can just drag and drop his task from one column to another to update it’s status, and drag vertically to re-order. OneDesk has such a view. 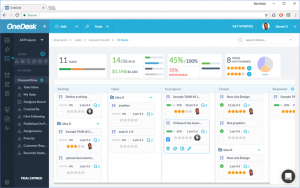 In OneDesk we take it a little further, allowing you to:
– Customize the columns by customizing the statuses and by hiding columns
– allowing you to create boards that columnize by other properties such as assignee, priority, or project. So you can drag and drop to re-assign, re-prioritize or move to a different iteration.
– Allow you to display and update entire projects this way, by representing the projects as cards. You can columnize by status, quarter, priority or a bunch of other properties.

Burn-down charts show the remaining work in a project over time. So if a project is proceeding well, you should see the trendline dropping as tasks are completed and the number of remaining points diminishes (in my image below the project is not going well). OneDesk captures these daily statistics and displays these properties on the project dashboard. Since OneDesk also supports more traditional estimations we can also can show remaining work (in man-hours) or the count of remaining tasks. 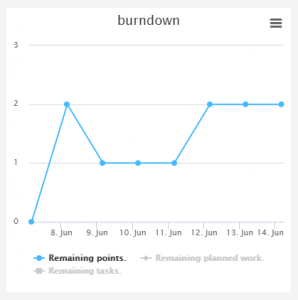 I hope this helps clarify some of the features built into OneDesk that support an agile project management methodology. As mentioned earlier, you can combine these with more traditional methods that use task-dependencies, deeper effort estimations, gantt charts, time tracking and much more.